There are in fact 100 billion galaxies, each of which contain something like a 100 billion stars. Think of how many stars, and planets, and kinds of life there may be in this vast and awesome universe…. We find that we live on an insignificant planet, of a humdrum star, lost in a galaxy, tucked away in some forgotten corner of a universe, in which there are far more galaxies than people.

But if there are billions and billions of stars and who knows how many planets, why is the universe so quiet? Shouldn’t we detect some signals from other worlds?

Part of the answer is that radio waves and similar signals get weaker the farther they travel. An inhabited planet would have to be fairly close to Earth, maybe less than ten light-years away, for us to distinguish its version of “I Love Lucy” or its “anyone out there?” message from the general cosmic noise.

And, despite a new report in the Proceedings of the National Academy of Sciences, there may not be a terrifically large number of habitable planets in our galaxy (the nearest stand-alone galaxy is two million light years from the Milky Way, so those billions and billions of other galaxies aren’t really relevant to the discussion).

The science academy report says there are (depending on which news story you read) between nine and forty billion planets in the Milky Way similar to Earth. In this case, “similar” means having about the same mass as Earth and being at the right distance from their respective suns to have liquid water on their surface. Whether it’s nine billion or forty billion, it seems like a pretty big number, so articles in the news media are generally implying that we probably aren’t alone.

On the other hand, the galaxy is a very big place and life may be extremely rare. If the odds against life coming into existence on an Earth-like planet and then evolving into something like us are one billion to one, there are now between nine and forty planets in the galaxy capable of producing situation comedies. It would be very odd if any of them were close enough for us to notice. In this context, therefore, forty billion would be a rather small number.

Maybe we aren’t completely alone in the universe, but even with these new findings, we should get used to the idea that we’re stuck with each other (and make the best of it).

Update: A physicist wonders about the likelihood of life coming into existence. We don’t know what the odds are:

…if life arose simply by the accumulation of many specific chemical accidents in one place, it is easy to imagine that only one in, say, a trillion trillion habitable planets would ever host such a dream run. Set against a number that big — and once you decide a series of unlikely accidents is behind the creation of life, you get enormous odds very easily — it is irrelevant whether the Milky Way contains 40 billion habitable planets or just a handful. Forty billion makes hardly a dent in a trillion trillion.

One of the news stories:

What Carl Sagan had to say:

Someone posted a few pictures of one of our nicest heavenly bodies. This one is my favorite (remember, “up” and “down” are relative terms): 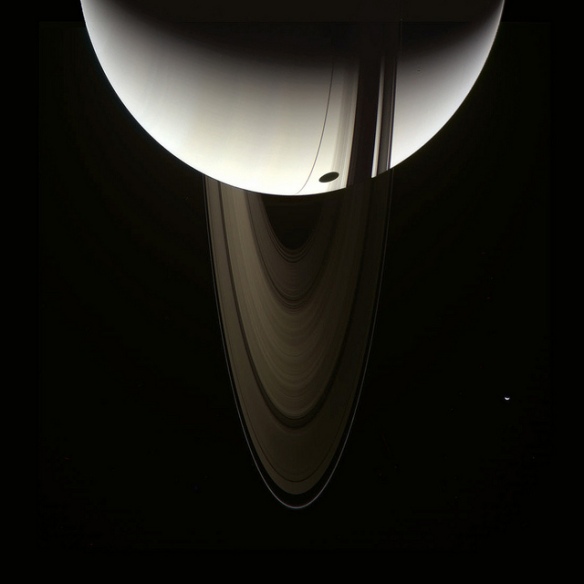 NASA has an interesting site called “Astronomy Picture of the Day”. The July 23rd entry is an extremely high speed film of lightning. The July 3rd picture of Saturn is also very good.

This is their photograph from 2010 July 20, possibly showing Zeus in action over Athens: