Back when there was a plague upon the nation (not the plague caused by the virus), the question whether the president was lying or merely mistaken was often discussed. Reputable journalists at reality-based news organizations didn’t want to say he was lying (30,000 times in four years) since maybe he believed all the nonsense he said. So, perhaps he wasn’t lying. It felt safer, less judgmental, to say he was merely saying things that weren’t true (30,000 times).

A very good reason to think he was lying his big boy pants off was that every “falsehood” he shared with us was self-serving. People who are merely confused occasionally say something that doesn’t make themselves look good. Not our former president. He never wavered from his fundamental message: “I’m a winner, not a loser”. He never deviated from the con man’s creed: “Never give a sucker (i.e. the rest of us) an even break”.

As the January 6th committee reviews the evidence, similar questions about this person’s state of mind are being asked. Did he really believe he won the election? Did he really intend to stop Congress from counting the electoral votes?

Josh Marshall of Talking Points Memo argues that trying to figure out what the creep believed is a waste of time:

Does he somehow convince himself of this? Like some kind of willed delusion? Stop it. You’re sticking too much to your linear way of thinking about belief. He hasn’t “convinced” himself. Why would he need to and what would that mean? He just says whatever will get him what he wants. Full stop….

… It cannot be the case that someone can evade legal culpability for a crime by consistently claiming not to know things that are obviously true, that everyone around him says are true, that he has no basis for disbelieving…. Otherwise, it’s a “get out of jail free” card for literally any crime. Just say consistently that you believe Mr. X threatened your life and you’re entitled to murder him without any legal consequences.

As we know from actual trials, you can’t just “believe” anything…. Your belief has to be reasonable….

We don’t need to go down the rabbit hole of the inner workings of [his] mind. That’s his problem. Not ours. As long as we do, we’re chasing a figment where there is only one possible witness: him. That’s silly.

The mob boss who says he’s never been a member of the mob isn’t confused. He’s lying because he doesn’t want to go to prison. That’s obvious. Just as this case is obvious.

One correction I’d make: not “everyone around him” was saying he lost. Rudy Giuliani and other sleazeballs were telling him the opposite. I hope that doesn’t make any difference when he’s prosecuted.

If you want more on this topic, two well-known lawyers who’ve worked for the government wrote an article for Salon about T____’s “criminal intent”:

As apologists prepare to defend his conduct, it is important to realize how shallow their defense will be. It is laughable to suggest that T____ genuinely believed he had won the 2020 election. We already know that experts and advisers told him the election results were legitimate. He heard this from his campaign advisers, Department of Justice lawyers, high-level officials in his own Department of Homeland Security and Republican elected officials [and at least 60 judges!]. T____ knew he had lost a free and fair election, but he wanted to remain in power anyway….

The committee’s work will be helpful, providing key evidence about … what T____ and others were saying and doing in public and what they were admitting in private.

[There is also] a foundation for showing T____’s corrupt intent: his long-established pattern of crying “fraud” to undermine results he didn’t like.

After T____ lost the 2016 Iowa caucuses to Ted Cruz, he cried fraud and demanded a do-over. He did the same thing in the general election after losing the popular vote to Hillary Clinton, despite winning the Electoral College… Throughout 2020, he made a series of statements along these lines … showing that even before the first vote was cast, he had no intention of accepting election results he didn’t like….

Even if T____ could somehow convince prosecutors and a jury that he really believed he had won — despite all the evidence to the contrary —  that would not have permitted him to use dishonest means to stay in power. His legal adviser, John Eastman, made clear that the scheme he and T____ tried to execute to keep T____ in power required breaking the law. You can’t keep power illegally even if you believe you really won an election. But prosecutors won’t need to reach this point, since the evidence is so strong that T____ and those around him knew he lost.

A Democratic strategist (they have one?) named Simon Rosenberg claims that “the most important, least understood story in US politics” is that the “economy does so well under Democrats and so poorly under Republicans”. He cites the following statistics:

40 million jobs added vs. 1 million? That sounded suspicious, so I found a chart based on data from the St. Louis Federal Reserve. It shows “job growth by U.S. President, measured as cumulative percentage change from month after inauguration to end of term” for presidents going back to Jimmy Carter. According to the chart, jobs increased by 33% during the Clinton, Obama and Biden years vs. 1% during the Bush, Bush and T____ years.

Reagan had the best job growth for a Republican (although not as good as Clinton). But even if you go back 46 years and include Carter’s and Reagan’s numbers, there’s a stark difference: 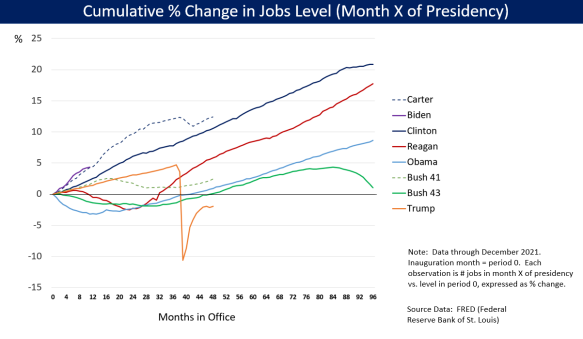 Yet if you were to ask voters which party does best with the economy, most would say the Republicans. They’re seen as the party of business and low taxes, despite the fact that they’re the party of Big Business and low taxes for corporations and the rich, which they always claim will improve the economy, but which doesn’t. For instance, they always say raising the minimum wage or raising taxes on the rich are “job killers”. The evidence shows otherwise: increasing the incomes of the working class and increasing taxes on the rich benefits the economy, since giving average consumers the ability to buy stuff increases the need for workers and taxing the rich allows the government to provide more services.

It may be hard to believe that voters are so wrong about the two parties. But here’s one reason why: Republicans have a powerful propaganda network and Democrats don’t. The Republicans have networks like Fox “News” and OAN, popular sites like Breitbart and the Daily Caller, and heavily-followed Facebook accounts, plus talk radio, all of which deliver a pro-Republican message, often in concert. The Democrats don’t have anything that organized or efficient. Most Democrats who pay attention to current events rely on corporate media, big organizations like the New York Times and CNN, that don’t want to seem too pro-Democratic.

Here are two examples of what the Democrats are up against. Some clown on Fox claimed that Democrats don’t really care about people who live in cities, because the 10 unhealthiest cities in America are run by Democrats:

But the list of cities Fox used referred to the 10 healthiest cities! 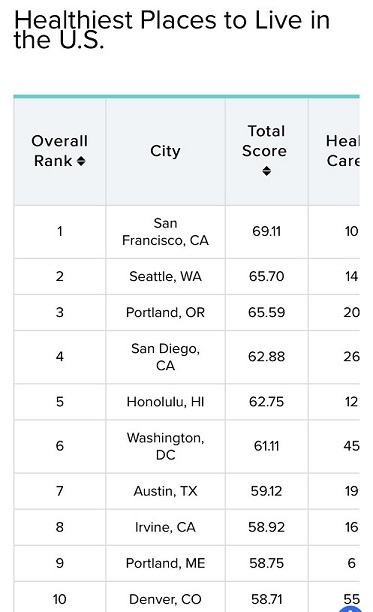 The House committee investigating the assault on the Capitol and what led to it is employing techniques more common in criminal cases than in congressional inquiries.

The story is accurate. Since T___ and his allies aren’t cooperating, the committee has been forced to be aggressive. The article suggests this is a risky move and might backfire. It’s not normal for congressional committees! What’s especially weird, however, is that, as an example of normal practice, the article ignores Watergate and Iran-Contra and uses the Benghazi attack. The Republican House committee that “investigated” Benghazi went on for months in order to push a non-existent scandal. Their behavior apparently seemed normal to the Times:

By comparison, the House select committee that spent two and a half years investigating the 2012 Benghazi attack issued just a dozen or so subpoenas — a small fraction of the number issued by the Jan. 6 committee so far — and made no criminal referrals.

The author James Gleick sums up:

Did anyone at the Times think for a second before including this Benghazi comparison? Why so few subpoenas? Maybe because, even though it was a sham, everyone cooperated (remember Hillary?) [testifying for 11 hours] Why  no criminal referrals? Maybe because THERE WERE NO CRIMES.