As he often does, Rosenberg overstates his case, apparently for rhetorical effect. After all, is it really true that introspection is a completely unreliable guide to what’s going on in our minds?

He offers as evidence three kinds of phenomena. The first is “blindsight”. Researchers have discovered that people with certain kinds of brain damage can perceive features of the world without being conscious of what they’re perceiving. For example, a person with a particular kind of damage to the visual cortex, who denies seeing anything at all, can “see” colors and shapes and even the expressions on other people’s faces. If asked whether they see something, they answer “no”, but forced to guess, they give the correct answer. Here, then, is a case in which conscious introspection, which indicates that I don’t see anything, is unreliable, because I really do.

Rosenberg’s second piece of evidence concerns our common belief that we have free will. Most of us are quite convinced that we make conscious decisions that result in freely-chosen actions all the time. However, experiments suggest that when we decide to perform a random action like moving a finger a certain way, the physiological process that will inevitably lead to the action taking place is underway before we’re aware of our decision to perform the action.

The most interesting case he cites is one in which a neuroscientist stimulates a subject’s brain, causing the subject’s finger or wrist to move but also causing the subject, milliseconds later, to claim that the motion resulted from the subject’s conscious decision.The interpretation of these findings and their relevance to the free will problem are controversial, but they do suggest that conscious decision-making may not be as important in making decisions as we think it is.

Finally, Rosenberg argues that the existence of optical illusions shows that consciousness is unreliable. We interpret visual stimuli according to unconscious rules of thumb (mixed metaphor). These rules of thumb, which are probably the combined product of human evolution and our own experience, often mislead us. The circles in the diagram below look different but really aren’t, so here’s another case, according to Rosenberg, in which we shouldn’t let consciousness be our guide. (The book includes some interesting illustrations from the Purves Lab, which are available here.)

Chapter 7 is relatively brief, because in this chapter Rosenberg is laying the groundwork for an especially counterintuitive idea he’s going to discuss in the next chapter (that we don’t actually think “about” anything at all). For now, here’s his conclusion:

We have seen that consciousness can’t be trusted to be right about the most basic things: the alleged need for visual experiences to see colors and shapes, the supposed role of conscious decisions in bringing about our actions, even the idea that we [see the world as it is]. If it can be wrong about these things, it can be wrong about almost everything it tells us about ourselves and our minds [162].

An important thing to note regarding Rosenberg’s argument is that he isn’t really claiming that conscious sense perception is completely unreliable (at least that’s not what I think he’s claiming). Although he denies that colors, for example, are mind-independent properties, he clearly believes that we do learn about the world using our eyes and ears. Otherwise, it would be odd to offer evidence that a blind person can perceive the “correct” color of an orange and that optical illusions are illusory (compared to what?). It would also be difficult to explain why most of us navigate the world better when our eyes are open and we’re not wearing headphones.

His principal thesis in this chapter is that certain conclusions we naturally draw from introspection (“the examination or observation of one’s own mental and emotional processes”) are mistaken. Specifically, it’s natural for us to assume that we need to be conscious in order to perceive certain features of the world, that our choices clearly determine our actions, and that (prior to being let in on the secret) we can always tell whether two lines are the same length or two circles are the same color just by looking.

I won’t offer a more basic conclusion about free will, except to say that conscious deliberation seems to help in making some decisions (whether to enroll at a college, get married or buy a house, for example) – whatever the underlying physiological processes are. Rosenberg may be right that conscious decisions are always the aftermath of unconscious decisions. We never really know what decision we’re going to make until it starts to “feel” like the right decision or we actually do something. Maybe our brains always do the necessary work unconsciously right before we discover what we’ve decided.

Coming up (sooner or later), part 13 of “A Guide to Reality”: Is it true that the brain does everything without thinking about anything at all?

Alex Rosenberg is the R. Taylor Cole Professor of Philosophy and chairman of the philosophy department at Duke University. He’s published more than 100 articles and reviews. Among his books are Microeconomic Laws: A Philosophical Analysis, Hume and the Problem of Causation, The Structure of Biological Science and Darwinian Reductionism. Like most philosophers these days, he writes for an academic audience. In 2011, however, he published a book for a general audience: The Atheist’s Guide to Reality: Enjoying Life Without Illusions.

The title is a little misleading, since Rosenberg derives his atheism from a more fundamental belief called “scientism”. That’s the view according to which, in Rosenberg’s words, “the methods of science are the only reliable ways to secure knowledge of anything”. Unfortunately, there is no word for a person who accepts scientism other than “scientist” and you can be a scientist without believing in scientism. For that matter, you can be an atheist without believing in scientism.

On the other hand, if you’re sure of God’s existence, The Atheist’s Guide to Reality probably won’t change your mind. It’s a book for people who are willing to take science extremely seriously, even to the point of concluding that many of humanity’s most common beliefs are wrong. Since I’m one of those people, I enjoyed the book, even while disagreeing with some of Rosenberg’s conclusions.

Because The Atheist’s Guide is well-written and covers so much ground (for example, physics, evolution, perception, consciousness, free will, history and morality), I thought it would be an interesting exercise to work through it, explaining and responding to Professor Rosenberg’s views right here on this blog (while continuing to write about other things, like class warfare and mowing the lawn).

If you want to consider the professor’s views first-hand and be able to correct my account of what he has to say (assuming you want to participate), the paperback and electronic versions are going for less than $15 online. 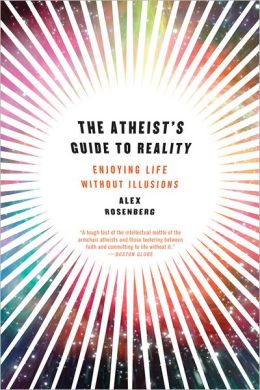 Next time:  the relationship between science and atheism.