The Commonwealth Fund has a new survey showing that the proportion of adults lacking health insurance has fallen by a quarter, from 20 percent of the population to 15 percent. (Most respondents, including 74 percent of newly-insured Republicans, report liking their plan.) Also, this week, the Congressional Budget Office again revised down its cost estimates for Medicare, which now spends $50 billion a year less than it was projected to before Obamacare passed. Also, the New England Journal of Medicine recently estimated that 20 million Americans gained insurance under the new law.

Just think what we’d be able to do in this country if the Republicans were reasonable or if there were fewer of them in office. We could have boosted the economy, for example, by investing in our infrastructure during this terrible recession instead of going crazy about the deficit. Below is a chart from Paul Krugman’s blog showing the “Great Disinvestment”, how public spending on construction has dropped in the past four years when it should have increased: 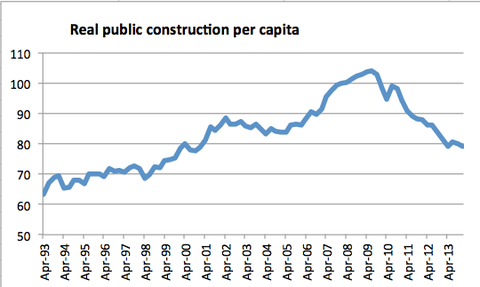