Alan Lightman, currently Professor of the Practice of the Humanities (!) at MIT, has posted a short article about consciousness at the New Yorker‘s site. Its centerpiece is a visit with Robert Desimone, an MIT neuroscientist who is trying to understand what happens in the brain when we pay attention to something.

Neuroscientists already know that different parts of the brain are activated when we look at faces as opposed to other objects. In one of Desimone’s experiments, people were shown a series of photographs of faces and houses and told to pay attention to either the faces or houses, but not both.

When the subjects were told to concentrate on the faces and to disregard the houses, the neurons in the face location fired in synchrony, like a group of people singing in unison, while the neurons in the house location fired like a group of people singing out of synch, each beginning at a random point in the score. When the subjects concentrated instead on houses, the reverse happened. Furthermore, another part of the brain, called the inferior frontal junction, a marble-size region in the frontal lobe, seemed to conduct the chorus of the synchronized neurons, firing slightly ahead of them.

Evidently, what we perceive as “paying attention” to something originates, at the cellular level, in the synchronized firing of a group of neurons, whose rhythmic electrical activity rises above the background chatter of the vast neuronal crowd. Or, as Desimone once put it, “This synchronized chanting allows the relevant information to be ‘heard’ more efficiently by other brain regions.”

Something else that’s interesting in the article is what the neuroscientist says about what’s been called philosophy’s “hard problem”, i.e. understanding the nature of consciousness:

Without hesitation, Desimone replied that the mystery of consciousness was overrated. “As we learn more about the detailed mechanisms in the brain, the question of ‘What is consciousness?’ will fade away into irrelevancy and abstraction,” he said. As Desimone sees it, consciousness is just a vague word for the mental experience of attending, which we are slowly dissecting in terms of the electrical and chemical activity of individual neurons.

But I think there’s something importantly different about consciousness as compared to the motion of a car or even the digestion of a sandwich.This is how David Chalmers, the philosopher who first referred to the “hard” problem (as opposed to the “easy” problems) of consciousness, put it in his 1995 article “Facing Up to the Problem of Consciousness”:

The really hard problem of consciousness is the problem of experience. When we think and perceive, there is a whir of information-processing, but there is also a subjective aspect…. This subjective aspect is experience. When we see, for example, we experience visual sensations: the felt quality of redness, the experience of dark and light, the quality of depth in a visual field. Other experiences go along with perception in different modalities: the sound of a clarinet, the smell of mothballs. Then there are bodily sensations, from pains to orgasms; mental images that are conjured up internally; the felt quality of emotion, and the experience of a stream of conscious thought. What unites all of these states is that there is something it is like to be in them. All of them are states of experience.

It is undeniable that some organisms are subjects of experience. But the question of how it is that these systems are subjects of experience is perplexing. Why is it that when our cognitive systems engage in visual and auditory information-processing, we have visual or auditory experience: the quality of deep blue, the sensation of middle C? How can we explain why there is something it is like to entertain a mental image, or to experience an emotion? It is widely agreed that experience arises from a physical basis, but we have no good explanation of why and how it so arises. Why should physical processing give rise to a rich inner life at all?

I don’t believe this “why should” question concerning experience or consciousness is very interesting from a philosophical perspective. It seems to me that it’s “merely” a very difficult scientific question to which scientists haven’t yet found the answer. It certainly isn’t the hardest problem in philosophy.

To me, a more interesting question is this: What is felt experience anyway? What exactly is the deep blue or middle C that we experience? For example, when we look at an orange, the precise nature of our experience depends on several factors, including the surface of the orange, the light in our environment and our sensory apparatus. That’s why it makes no sense to say that the surface of an orange is orange in itself. When we hold an orange, the surface feels bumpy, but it presumably wouldn’t feel the same way if we were much, much smaller or much, much larger.

I’m not suggesting at all that David Chalmers has failed to recognize the real issue here. But I think that stating the issue in this way emphasizes the most puzzling aspect of consciousness. Here’s another way of putting it: if the world outside of us isn’t just as we experience it, and it’s not in our heads either (there are relatively few colors or sounds inside our brains), where the hell is it?

These days, philosophers often compare brains to computers. The brain is the hardware and the mind is the software. But it occurred to me recently that software doesn’t do anything unless it has data to process (that’s not a great insight if you’ve ever worked with or thought about computers). This got me to wondering if we should think of our experience as data. Not the kind of data that computers process, but a special kind of data that takes a variety of forms (in Chalmers’ words, “the felt quality of redness, the experience of dark and light, the quality of depth in a visual field….the sound of a clarinet, the smell of mothballs…. bodily sensations…. mental images…. the felt quality of emotion…. a stream of conscious thought”). We might call this kind of data “sense data”.

But, lo and behold, that’s exactly what a number of philosophers in the early 20th century, including Bertrand Russell and G. E. Moore, began calling it. (Actually, I already knew that, but it was still a pleasant surprise when I realized I’d gone from thinking about computers to thinking about a 100-year old theory).

Theories that refer to sense data and similar entities aren’t as popular among philosophers as they used to be, but such theories have been one of the most discussed topics in epistemology (the theory of knowledge) and the philosophy of perception for a long time. William James referred to “the data from all the senses” before Russell and Moore (although James wouldn’t have accepted Russell’s or Moore’s particular views). And sense data theories had their precursors in the 17th and 18th century writings of Rene Descartes and the British empiricists Locke, Berkeley and Hume.

As usual, the Stanford Encyclopedia of Philosophy has a helpful article on the subject. The author, Michael Huemer, characterizes sense data in this way (using “data” in the traditional plural sense rather than as a singular collective noun):

Many philosophers deny that sense data exists or that we’re directly aware of it. Proposition 3 above is also especially controversial. It’s also often argued that if we were actually aware of sense data, we’d be cut off from the world around us. I don’t plan to discuss any of this further right now, but it’s a topic I want to get back to. It’s a really hard philosophical problem.

PS — There is a funny site called Philosopher Shaming that features anonymous and not so anonymous pictures of philosophically-inclined people owning up to their deepest and darkest philosophical secrets. I uploaded my picture two years ago: 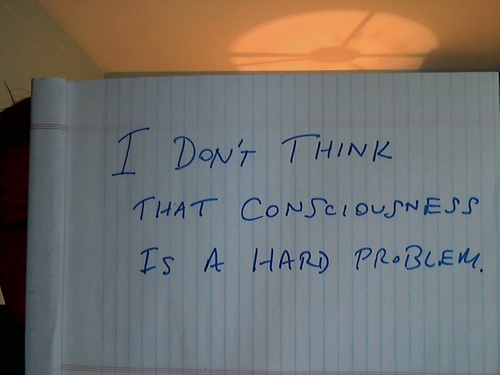 The Conscious Mind is one of those philosophical works that becomes famous because it features interesting arguments in support of implausible conclusions. Chalmers argues for property dualism, the thesis that mental properties are fundamentally different from physical properties. In other words, mental states are not equivalent to, cannot be reduced to, and do not logically supervene on brain states. This is a more plausible view than the traditional dualist claim that there are mental substances (minds or souls) in addition to physical substances, and that the mental and physical substances somehow interact.

Chalmers agrees that there are psycho-physical laws that relate brain states and mental states, but argues that physical properties and mental properties are ontologically distinct. Maybe this is the correct view, but Chalmers goes further when he begins to discuss a possible fundamental theory of consciousness. He thinks that we should ascribe consciousness to any system that exhibits the same causal relationships as a brain, e.g. automated systems, John Searle’s Chinese Room translation scheme, and Ned Block’s billion minds linked together by radio. Since he views consciousness as a fundamental property of the universe, he thinks that rocks and even sub-atomic particles might possess some simple form of proto-consciousness. He suggests that panpsychism is a real possibility. He also argues that the simplest interpretation of quantum mechanics involves minds branching into other minds, so that each of us is one of a vast set of similar minds, all having split off from our infant selves.

The naturalistic or property dualism that Chalmers advocates, featuring “physical properties, separate phenomenal properties, and a lawful connection between the two”, is certainly worth considering as a philosophical theory of mind. If a property is merely a way of being, maybe mental properties (what it is like to have experiences or to be an X) are fundamentally different from physical properties. However, his views on what systems or objects might be conscious are much less plausible, despite the many ingenious arguments that he offers.  (7/25/11)