David Frum, who wrote speeches for George W. Bush, is one of the few right-wingers who haven’t swallowed Drump’s Kool-Aid. He now writes for The Atlantic, where he published an excellent article in January called “How To Build An Autocracy”. Its subtitle was “The preconditions are present in the U.S. today. Here’s the playbook Donald [Drump] could use to set the country down a path toward illiberalism”.

It’s a full-length magazine article that takes a while to load because of all the advertisements (unless your ad blocker is working), but it was very well-received and is still worth reading. Frum begins by imagining Drump being sworn in for his second term. America hasn’t gone completely over the edge but it’s not healthy either. The article concludes:

Those citizens who fantasize about defying tyranny from within fortified compounds have never understood how liberty is actually threatened in a modern bureaucratic state: not by diktat and violence, but by the slow, demoralizing process of corruption and deceit. And the way that liberty must be defended is not with amateur firearms, but with an unwearying insistence upon the honesty, integrity, and professionalism of American institutions and those who lead them. We are living through the most dangerous challenge to the free government of the United States that anyone alive has encountered. What happens next is up to you and me. Don’t be afraid. This moment of danger can also be your finest hour as a citizen and an American.

I was reminded of the article because Mr. Frum generated what’s called a “tweetstorm” on Twitter today. Up until a few months ago, I thought Twitter was basically a joke. I didn’t realize how interesting it is as a source of political news and commentary. So I created an account and now follow a small number of journalists, politicians and people with common interests (and a few comedians). Some of the journalists, including David Frum, offer what’s almost a running commentary on the day’s events. Here’s what he wrote today in 21 segments:

Of course, it will be the height of irony if Drump, after claiming that he inherited a disaster from Obama, ends up getting credit for the economy improving and ISIS being defeated, but that’s the way American politics works. At the present moment, however, what especially struck me about Frum’s comments was the idea that citizen apathy, including my own, might be growing.

I was able to attend a town hall by our Congressman, Rep. Leonard Lance (NJ-7), two weeks ago. He the typical relatively sensible Republican who went to Washington and now almost always follows the party line. At the town hall, he avoided straight answers, repeated some ridiculous Republican talking points and made promises he won’t keep, but at least he got an extended earful from hundreds of angry constituents.

But now that the excitement of the town hall has faded, and no big demonstrations like the Women’s March on Washington in the news, I’m beginning to feel a little numb myself. That’s natural, I suppose. Intensity will come and go, even as the outrages continue. In the meantime, however, if you’d like to do something positive, there’s a special election being held in a suburban district outside Atlanta to replace the lying creep who’s now running the Dept. of Health and Human Services.

Jon Ossoff is a Democratic candidate who could pull off an upset in Georgia’s Sixth Congressional District if he gets enough support and there’s enough of an anti-Drump backlash. Even if he doesn’t win, a close election will show Republicans like our Leonard Lance that their re-election isn’t assured. I made a donation today. You can too if you visit Mr. Ossoff’s campaign site.

Even if you’re not at peak emotional intensity right now, you can always spend a few dollars for an important cause.

Senator Bernie Sanders was in Iowa at Drake University a few weeks ago. This paragraph from an account of his visit caught my eye:

At first it was unclear who the bigger enemy of the people were to Sanders — the Kardashians or the Koch brothers.  The Kardashians, or rather our public fascination with them, represents America’s apathy. Sanders was clear that nothing progressive can happen until people start paying attention.  Sanders told his audience that Americans are getting screwed, and that we had better pay attention and get off our asses.

What the Senator said about paying attention brings to mind one of his colleagues, Senator Elizabeth Warren. The journalist Matthew Yglesias wrote this about her under the heading “What Makes Elizabeth Warren So Great”:

At Janet Yellen’s monetary policy hearing, Warren took aim at the Federal Reserve’s General Counsel, Scott Alvarez. Alvarez is one of the people with the highest importance-to-fame ratios in the whole American government. His existence — to say nothing of his work — is incredibly obscure. But Warren used her considerable celebrity and her dorky charisma to shine a light on it.

And she has a unique knack among today’s elected officials for seizing on things that are languishing in obscurity and making them blow up. The greatest trick the special interests ever played was getting the world to stop paying attention. Warren makes people pay attention, and it’s great.

Senator Warren is terrific. We need more politicians who speak truth to power and are heard when they speak. But Senator Sanders makes a key point in an image on his Facebook page: 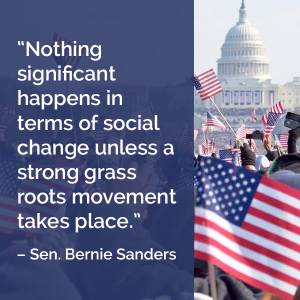 We need to both pay attention and get organized.