The last two Democratic presidents, taking office in 2009 and 2021, inherited disasters from their Republican predecessors. Obama was much too easy on banks and bankers and didn’t do enough to help the victims of the financial collapse, but he restored some normality to our economy fairly quickly. Biden won’t be as successful in the short term.

His administration took serious measures to address the pandemic, unlike You Know Who’s, but right-wing insanity and the Omicron wave delayed getting back to normal. Supply chain disruptions,  corporate greed and the country going back to buying and selling have led to inflation (as in other countries). After four years getting what he wanted from his stooge in the White House (including criticism of NATO and the illegal interruption of military aid to Ukraine), Putin decided it was time to take Ukraine. That will increase inflation even more (and although Republicans want us to be “strong” and stop buying Russian gas, they’ll criticize Biden when gas prices go up). It appears that Republicans can sit back, not propose anything helpful, lie about Biden’s failures and simply wait for unhappy voters to reward them in November.

Nevertheless, I think it’s worth knowing what’s going on with the economy. Paul Krugman offers his analysis:

When Vladimir Putin invaded Ukraine, I think it’s fair to say that most observers expected him to get away with it. Surely Russia’s huge military would take Kyiv and other major cities within a few days; surely the West would respond with its usual timidity, giving Russia no more than a minor slap on the wrist.

Instead, here we are, 13 days in, with Kyiv and Kharkiv still standing and invading forces bogged down by fierce Ukrainian resistance (helped by a rapid influx of Western weapons) and disastrous logistical problems. At the same time, Western sanctions on the Russian economy are clearly already having severe effects and may get even stronger.

Obviously all this could change: Russian forces could regroup and resume the offensive, weak-kneed Western governments could start lifting sanctions. For now, however, Putin is facing far worse consequences than he could have imagined.

Unfortunately, standing up to aggression doesn’t come free. Events in Ukraine and Russia will, in particular, impose serious costs on the world economy. The question is, how serious?

My tentative answer is that it will be bad, but not catastrophic. Specifically, the Putin shock seems unlikely to be nearly as bad as the oil shocks that roiled the world economy in the 1970s.

As in the 1970s, the blow to the world economy is coming from commodity prices. Russia is a major exporter of oil and natural gas; both Russia and Ukraine are — or were — major exporters of wheat. So the war is having a big impact on both energy and food prices.

Start with energy. So far, the sanctions being applied by Europe against Russia conspicuously don’t apply to oil and gas exports; the United States is banning oil imports from Russia, but this won’t matter that much, because America can buy and Russia can sell elsewhere. Markets are nonetheless reacting as if supplies are going to be disrupted, either by future sanctions or because global energy companies, fearing a public backlash, are “self-sanctioning” their purchases of Russian crude. Indeed, Shell, which bought Russian oil at a discount the other day, has apologized and says it won’t do it again.

As a result, the real, inflation-adjusted price of oil has shot up almost to the level it hit during the Iranian revolution in 1979: 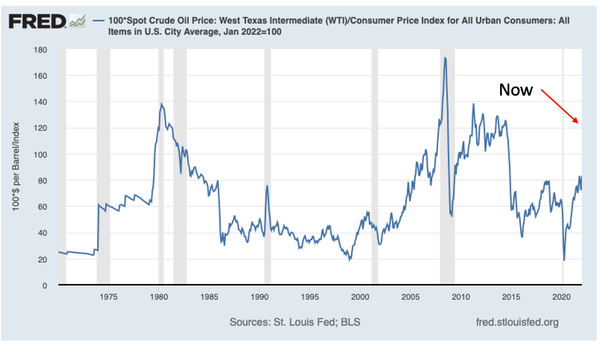 To be honest, I’m a bit puzzled by the size of this price spike. Yes, Russia is a major oil producer. But it accounts for only about 11 percent of world production, whereas Persian Gulf producers extracted a third of the world’s oil back in the 1970s. And Russia will probably find ways to sell a significant fraction of its oil despite Western sanctions.

Furthermore, the world economy is much less dependent on oil than it used to be. Oil “intensity” — the number of barrels of oil consumed per real dollar of gross domestic product — is half what it was in the 1970s.

What about natural gas? Europe depends on Russia for a lot of its supply. But gas consumption is strongly seasonal:

So the impact of Russian disruption won’t be that big until late this year, giving Europe time to take measures to make itself less vulnerable.

Overall, then, the Putin-made energy crisis will be serious but probably not catastrophic. My biggest concern for the United States, at least, is political. You mightn’t think that Republicans could simultaneously demand that we stop buying Russian oil and attack President Biden for high gasoline prices. That is, you mightn’t think that if you’d spent the past 25 years sleeping in a cave. In fact, that’s exactly what’s about to happen.

Politics aside, food may actually be a bigger issue than energy. Before Putin’s war, Russia and Ukraine combined accounted for more than a quarter of the world’s wheat exports. Now Russia is sanctioned and Ukraine is a war zone. Not surprisingly, wheat prices have shot up from less than $800 a bushel before Russia began massing its forces around Ukraine to around $1,300 now.

In wealthy regions like North America and Europe, this price surge will be painful but for the most part tolerable, simply because advanced-country consumers spend a relatively small percentage of their income on food. For poorer nations, where food is a huge fraction of family budgets, the shock will be much more severe.

Finally, what impact will the Ukraine war have on economic policy? Spiking oil and food prices will raise the rate of inflation, which is already uncomfortably high. Will the Federal Reserve respond by raising interest rates, hitting economic growth?

Probably not. The Fed has long focused not on “headline” inflation but on “core” inflation, which excludes volatile food and energy prices — a focus that has stood it in good stead in the past. So the Putin shock is exactly the kind of event that the Fed would normally ignore. And for what it’s worth, investors appear to believe that it will do just that: Market expectations of Fed policy over the next few months don’t seem to have changed at all.

Overall, the Russian shock to the world economy will be nasty, but probably not all that nasty. If Putin imagines that he can hold the world to ransom, well, that’s probably yet another fatal miscalculation.