We’ll be learning more about Ukraine now that Putin has recognized two parts of it as “independent nations” and moved in Russian “peacekeeping” forces. They’re the so-called People’s Republics of Donetsk and Luhansk. I wondered what this meant in terms of Ukrainian geography.

Legally speaking, Ukraine is divided into 27 administrative regions. There are 24 “oblasts” (a term inherited from the Soviet Union”), plus the Autonomous Republic of Crimea (which Russia has occupied since 2014) and two cities, the Crimean city of Sevastopol and Ukraine’s capital, Kiev (or Kyiv). Donetsk and Luhansk are the two oblasts at the eastern edge of Ukraine next to Russia. Their principal cities are also called “Donetsk” and “Luhansk” (like New York, New York). In addition, the Donetsk and Luhansk oblasts are collectively known as the “Donbas” region. Unlike Crimea, Donbas is mostly Ukrainians, not ethnic Russians.

There’s been fighting between the Ukrainian government and Russian-backed rebels in the Donbas region since 2014 (the same year Russia took Crimea). Thousands have died. More than a million Ukrainians have been displaced — most of them have left the country. Lately, there’s been a stalemate between the two sides and a partial ceasefire.

In the map below showing recent ceasefire violations (the yellow dots), the darker gray area represents Donbas as a whole (or most of it). The Ukrainian government controls the area north and west of the red line; the rebels control area south and east of the line. 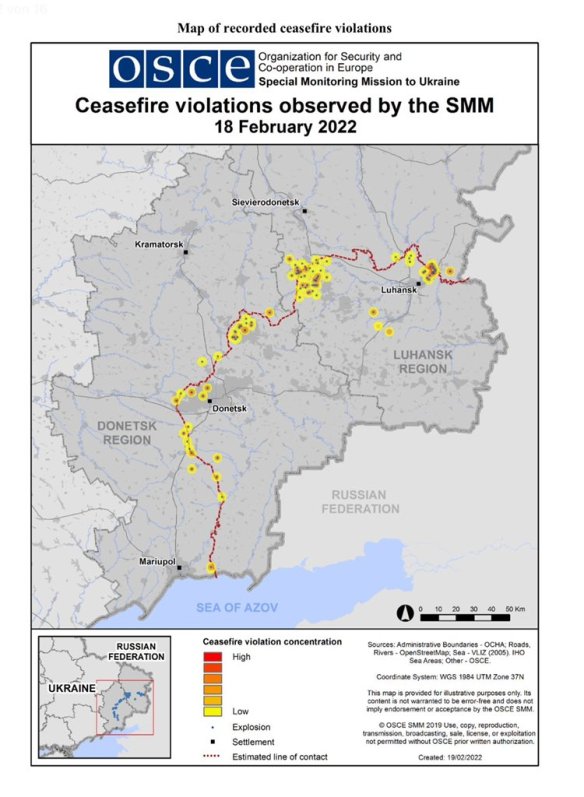 The current division raises an obvious question: what will happen to the parts of Donetsk and Luhansk now controlled by Ukraine? Well, the Russian puppets who now “lead” those two “independent nations” have declared all of Donetsk and Luhansk (the entire Donbas) to belong to their new “nations”. So will the Russians try to take control of the areas north and west of the red line? If the Russians agree that those parts of Donbas really do belong to the two new People’s Republics, they will have to take them by force. Ukraine will resist and the fighting will be much worse than it’s been.

Ukrainian resistance may then lead to Russia deciding to take Ukraine as a whole, carrying out the massive invasion everybody has been talking about. An article in The Guardian sums up the current situation:

[The decision to recognize Donetsk and Luhansk as independent nations] answers some questions but others remain. There is a chance Putin may simply recognise the two republics “as they are”. This, after months of apocalyptic scenarios, would probably be privately accepted as a good outcome by Ukraine and the west.

But it seems likely that Putin has much more in mind than simply taking a nibble out of Ukraine’s east and taking formal responsibility for territories he already de facto controlled.

Putin’s final words, that if Kyiv did not stop the violence [violence that Russian propaganda claims Kiev is committing, but isn’t], they would bear responsibility for the “ensuing bloodshed”, were ominous in the extreme. It sounded, quite simply, like a declaration of war.