A philosophy professor named Tim Sommers and I had an exchange at Three Quarks Daily about the Liar’s Paradox (the president wasn’t mentioned):

TS: There’s something wrong with the sentence, “This sentence is false.” Is it true or false? Well, if it’s true, then it’s false. But then if it’s false, it’s true. And so on. This is the simplest, most straightforward version of the “Liar’s Paradox”. It’s at least two thousand five hundred years old and well-known enough that you can buy the t-shirt on Amazon.com. 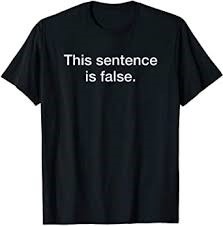 I’ve been thinking about the “Liar’s Paradox” lately, because I’m teaching an “Introduction to Philosophy” class on paradoxes (and writing a book) called “Life’s a Puzzle: Philosophy’s Greatest Paradoxes, Thought-Experiments, Counter-Intuitive Arguments, and Counter-Examples from AI to Zeno”. It starts with the “Liar’s Paradox” because it’s one of the oldest and most well-known, but also simplest and most daunting, of philosophical paradoxes. Some people think that while “puzzle” cases in philosophy are fun and showy, they are not where the real action is. I think every real philosophical puzzle is a window onto a mystery. And proposed solutions to that mystery are samples of the variety and possibilities of philosophy.

“They must be silenced, because they are disrupting whole households by teaching things they ought not to teach – and that for the sake of filthy lucre.12 One of Crete’s own prophets has said it: ‘Cretans are always liars, evil brutes, lazy gluttons.’13 This statement is true.14”

Verse 12 has philosophers dead to rights. We are disrupting whole households, teaching things we ought not to teach and – speaking for myself at least – it’s all about the filthy lucre (hence, the book). But verse 13 is what we want here. It has “Cretan’s own prophet” saying “Cretans are always liars.” Now, if that just means that all Cretans lie a lot, but not all the time, there’s no problem. But if it means that Cretans are always lying whenever they speak, given that this is asserted by a Cretan (read: liar), we have a paradox. This then is the primordial, liar’s version of the “Liar’s Paradox”. If that’s unclear you can simplify the liar’s version down to: “I am lying right now.”

By the way, “Crete’s own prophet” was “Epimenides of Crete”. Crete is the largest of the Greek islands, only 99 miles from the mainland, but (at that time) culturally distinct. It was the home of the Minoans. You might think you’ve never heard of the Minoans, but you have. They built a very famous labyrinth . . .

You have to admit, our ordinary, natural language is a mess. It’s imprecise and ambiguous and, most importantly, as any computer programmer will tell you, natural languages are over-flexible. They allow sentences to do things like self-referentially assign their own truth value. Computer languages can be thought of as artificial languages that replace natural languages in some contexts. Some universities now have departments of “logic and computation” that are no longer part of the philosophy department. This kind of thing happens all the time historically, by the way –  some part of philosophy morphs into a science. Four hundred years ago physics was “natural philosophy” and now they expect their own offices.

Anyway, in such an artificial language you might think there should be a kind of hierarchy of types of sentences. So, in computing, or in [the philosopher Alfred] Tarski’s logic, sentences can only assign truth values to sentences that are lower in the hierarchy. They are forbidden to assign truth-value to themselves or any of the sentences that outrank them.

“This sentence is false” is just nonsense, then, because it violates this rule. On this way of looking at it, the “Liar’s’ Paradox” is evidence that you need to enforce such a rule and/or develop an artificial language – or you get insoluble paradoxes.

So, how can we resolve the “Liar’s Paradox”. Beats me. I am hoping you will leave the solution in the comments section so I can go tell my class.

LF (me): I wonder what it would mean to “resolve” the Liar’s Paradox? Regarding the simple case, “this sentence is false”, would we have to show why it’s actually a regular true or false statement, or that it’s meaningless or vague or ungrammatical? There are lots of ways language can be used poorly. For example, some statements are rude. “This sentence is false” is paradoxical and not paradoxical in a good way if you’re having a normal conversation. If you’re teaching a course and want to discuss the issues the sentence raises about language, it’s paradoxical in an excellent way. But, in general, we don’t have to resolve a paradox like “this sentence is false”. We just have to avoid talking paradoxically (or rudely, falsely, ungrammatically, etc.), unless there’s a special reason to do otherwise.

TS: Thanks for the comment. I get what you are saying, I think. But still…what, if anything, is wrong with “This sentence is false”? It doesn’t appear to be, as you say, “meaningless or vague or ungrammatical” or even “rude”. Calling it “paradoxical” is just giving it a name. So, what would a resolution look like? Here are my thoughts on what might qualify. It’s true. Appearances aside, it’s just false. It’s ill-formed logically or as a speech-act. It’s meaningless, because… My hunch is that self-referentially assigning its own truth value violates some kind of “rule”, but I would like to see what that rule is better characterized – because I think it would be informative.

[LF]: I will try to clarify. Presumably, to resolve a paradox means to show that it isn’t paradoxical. To resolve a problem is to make it go away, to no longer be problematic. Yet “This sentence is false” is clearly paradoxical, so it can’t be resolved or addressed in that way.

The next question is why is “this sentence is false” paradoxical? It’s paradoxical because it gives with one hand and takes away with the other. In ordinary, practical terms, declarative sentences are supposed to say something that’s true, yet “this sentence is false” simultaneously suggests that it’s not true. If the statement is meant to convey accurate information, it fails. It’s paradoxical. If it’s meant as entertainment, however, or as an example in a philosophy course, the fact that it’s paradoxical isn’t a problem; it’s a perfectly fine way to speak.

It’s the same situation with the two-sentence version of the paradox (“the next sentence is false”; “the previous sentence is true”). In practical terms, uttering these two declarative sentences suggests that each sentence is both true and not true (the principal difference being that each sentence refers to the other, and thereby indirectly to itself, not directly to itself, as in the one-sentence case). It’s another unresolvable paradox, a case in which language is being used poorly, if it’s meant in the usual way, to convey accurate information when uttering declarative sentences. The two-sentence case isn’t ungrammatical or meaningless in the usual sense, or rude or vague, other ways in which language can be spoken inappropriately unless there are overriding reasons to speak in those ways, for dramatic effect, for example.

(Note: “Don’t mess with the formula” are the immortal words of Mike Love, addressed to Brian Wilson when things began to get strange around 1966.)

One other thought. I’m enjoying my news vacation during these troubled and troubling times, even though news leaks through. One of the results of avoiding the news is that you’re living in a different context. It occurred to me that, if I ran across the phrase “Fump Truck” during a really thorough news vacation (or if FBI Director James Comey had followed the rules and kept his mouth shut in 2016), I’d probably think it was a variation on “Dump Truck”. It wouldn’t suggest an entirely different phrase (similar to, but not “Dump Trump”).