WFMU is a listener-sponsored, free-form radio station broadcasting out of Jersey City, New Jersey. Now, of course, their programs, old and new, are available worldwide at http://www.wfmu.org.

A couple days ago, the insightful person who does the “Fool’s Paradise” show on Saturday afternoon played “Chevy Shut Down” by the Jaguars. It went by quickly and I’d never heard it before, but there was something extremely familiar about it.

Now, of course, there’s YouTube, so an obscure single from 1964 can be listened to over and over again, all over the world, maybe forever! It’s also easy to investigate just about anything. Some have investigated “Chevy Shut Down”, but with little success. The YouTube description says “Millions of hours searching the Google has netted NO information”. I searched “the Google” too and think the Jaguars may have started out in Oklahoma, but it isn’t clear where they came from or who they were (there have been lots of groups called the “Jaguars”). One thing I did find out is that two years ago a copy of the 45 sold on eBay for $100.

What’s especially interesting about this song, aside from its general rambunctiousness and semi-incomprehensible lyrics, is that it’s a “mashup” (the modern term). The Jaguars started with the Beach Boys’ 1963 classic “Shut Down”, rewrote the lyrics and apparently borrowed the intro from “Fun, Fun, Fun”. Then they threw in some of the Rip Chords’ “Hey, Little Cobra” (“go little Chevy, cause I know you’re gonna shut ’em down”) and Chuck Berry’s “Little Queenie” (“go go, go little Chevy”). The result: Cherry Records C-0369, “Chevy Shut Down”. 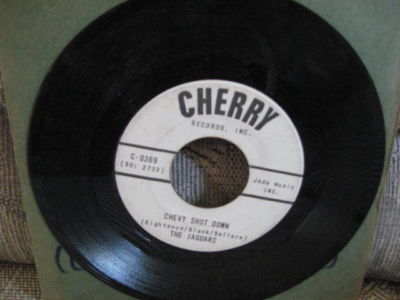 The song starts after the brief introduction. (Some of the mystery is lifted after the video.)(Update: the YouTube video I originally posted is now gone. This one is from 2018.)

This is my Dad singing this song. The Jaguars only recorded 2 songs back in the 60’s. Chevy Shut Down and Just Out Of Luck. I know he was proud to see this. There are still some copies of these songs left but very hard to find.

That is pretty cool.

Whoever they were, the Jaguars did a mashup with incomprehensible lyrics in 1964 that still rocks. They were clearly ahead of their time.

For comparison purposes, the original “Shut Down” from 1963:

The Rip Chords’ big hit reached #4 in the U.S. at the dawn of the British Invasion (and led to “go little Chevy, cause I know you’re gonna shut ’em down”):

August 2020 update: There’s been recent discussion in the comments. The enduring mystery isn’t what it used to be. Thus, ladies and gentlemen: The Jaguars! (Most of them anyway. See below.)

Original members of the “Jaguar Band” Left to right: Willie “Bruto” Perdue , Gerald Black “Jerry” & Dale Sellers on the trunk. Not in the picture was James “Rabbit” Williamson.  Rabbit said that car belonged to Willie Perdue. It was a 57 Chevrolet and he cut the top out to turn it into a convertible.  Rabbit said he was probably riding his motorcycle around somewhere. Juanita Purdue is on the hood and that’s Judy (Mclaughlin) Black. Dale’s father Mr. Calvin took the picture in their front yard on a Sunday afternoon May 1965.

Rabbit was telling how “The Jaguars” played @ The Civic Center in Panama City.  He said Earl Lowery was playing the drums @ that time, when Willie was in Vietnam.Rabbit said The Jaguars won a talent show in Evergreen, AL that sent the band to Panama City. Not too long after playing in  Panama City Dale went to Nashville.  Rabbit said, “we did what we wanted to do, record that record” (Rabbit, Jerry, Dale, & Willie).

13 thoughts on “The Enduring Mystery of “Chevy Shut Down””