So writes Saul Cornell, professor of history at Fordham University and the author of “A Well-Regulated Militia: the Founding Fathers and the Origins of Gun Control in America”:

In a 6–3 decision …, the Supreme Court struck down New York’s century-old gun law against concealed carry on [June 23rd]. New Yorkers and residents of a handful of other states and the District of Columbia—which had more strictly regulated who can have a concealed-carry permit—must now accept the type of laws popular in Texas and other red states. The decision was hardly a surprise to court watchers, but the opinion is nonetheless troubling on many levels.

The fact that this opinion was written by Justice Clarence Thomas, an originalist so rigid in his thinking that Justice Antonin Scalia once used him as a foil to distinguish his respect for precedent—”I’m an originalist and a textualist, not a nut,” Scalia quipped— contrasting the burn-it-all-down approach favored by his laconic colleague. Thomas has long been a proponent of supersizing the Second Amendment and has argued—against strong statistical evidence—that lower courts were treating the Second Amendment as a second-class right.

Thomas and his fellow originalists have set out to analogize the Second Amendment to core free speech rights, a bizarre legal analogy with little foundation in either legal history or tradition. In fact, guns have generally been treated as a form of property under American law for more than three centuries, a fact that appears to have escaped the notice of Thomas and the court’s newest originalists despite their professed commitment to an interpretive approach that focuses on history, text, and tradition.

Ultimately, the majority opinion in NYSRPA v. Bruen is one of the most intellectually dishonest and poorly argued decisions in American judicial history. Indeed, with little sense of irony, Thomas even quotes Chief Justice Roger B. Taney’s infamous opinion in Dred Scott approvingly, not only treating it as good legal authority but suggesting that the author of the worst decision in American law understood the Second Amendment better than any other judicial figure in American history. Turning to Taney for judicial inspiration would have once ended a judge’s career, but the court’s new originalist majority appears most of the time to be making history by inventing it, instead of by interpreting the law.

The old originalism of Robert Bork and Chief Justice William Rehnquist sought to use history to constrain judicial discretion and activism. The new originalism favored by Thomas and his fellow originalists has embraced judicial activism on steroids. Indeed, the court’s current use of originalism more clearly resembles an act of ventriloquism in which old texts are pressed into the service of modern agendas with little regard to how they were read at the time they were written. The new originalism, including the Bruen decision, turns historical actors into little more than stage dummies for the justices to project their own modern values and ideas onto the past.

One of the most remarkable features of Justice Stephen Breyer’s trenchant dissent in Bruen is his frank assessment of the appalling quality of the history being pedaled by his colleagues. Calling out the justices for engaging in “law office history,” a degraded form of legal analysis that warps history to fit the desired ends favored by a judge or justice, is something scholars have criticized the courts—including the Supreme Court—for practicing with some frequency. Still, it is unprecedented for a serving justice to hurl this type of accusation at colleagues sitting on the bench, and Breyer did just that. It is hard to dispute Breyer’s characterization of his colleagues given that Bruen is an opinion filled with legal and historical errors that all cut in the same direction, expanding gun rights by rewriting the American past.

To illustrate the shocking and amateurish use of history in Bruen, one need only examine the way Thomas ignored and distorted the evidence of robust gun regulation during Reconstruction, the period of history that he and other originalists have claimed is the key to understanding the scope of legitimate gun regulation by states and localities. Thomas reluctantly conceded that Reconstruction-era Texas had laws of similar scope to New York’s challenged laws. Yes, once upon a time Texas led the nation in enacting strong gun regulation!

Thomas, though, falsely claimed Texas was an outlier and, hence, that its evidence could be discarded. Similarly, Thomas discounts strong gun regulations in the Western United States because these too were unrepresentative outliers. In the Thomas originalist universe, apparently no amount of evidence is enough to support gun control, but no amount of evidence is too little to legitimate gun rights claims. In fact, millions of Americans were living with gun laws at least as restrictive as the New York law at issue in Bruen for many years during the period of history Thomas contends is crucial to understanding the application of the Second Amendment to states and localities.

Just looking at the history of firearms law in nation’s largest cities undermine the central claim in Bruen. As the table below shows, all of the nation’s largest cities were living under some form of restrictive public carry regime by the end of the 19th century. Many of these laws were enacted during Reconstruction, or soon after. Thomas not only ignores this evidence, but he also ignores recent scholarship showing that these laws were enforced in a racially neutral fashion for decades before white supremacists turned them against Black people. 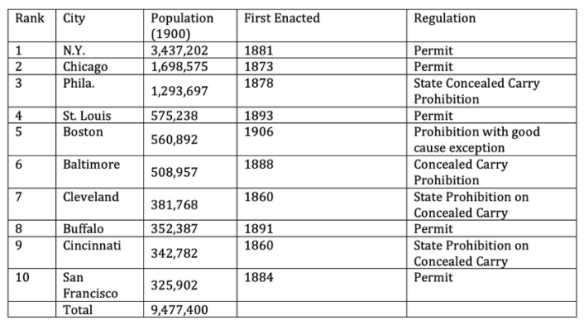 Unfortunately, Bruen’s level of intellectual dishonesty and ignorance of basic legal historical method and well established facts easily located in readily accessible sources further undermines the legitimacy of the court at a moment when it can ill afford any further erosion in its standing. Bruen may be a victory for gun rights advocates, but it is another example of a court in serious intellectual and moral decline.