The economy sucks. It’s hard to escape that message, even if it’s not true. Eric Boehlert of Press Run criticized the reality-based press (not Fox) for “burying great news”:

Like clockwork, the first Friday of the month brought another blockbuster jobs report. The U.S. economy under President Joe Biden added another 400,000-plus new jobs in March, it was announced last week.

Biden is currently on pace, during his first two full years in office, to oversee the creation of 10 million new jobs and an unemployment rate tumbling all the way down to 3 percent. That would be an unprecedented accomplishment in U.S. history. Context: In four years in office, T____ lost three million jobs, the worst record since Herbert Hoover.

Yet the press shrugs off the good news, determined to keep Biden pinned down. “The reality is that one strong jobs report does not snap the administration out of its current circumstances,” Politico stressed Friday afternoon. How about 11 straight strong job reports, would that do the trick? Because the U.S. economy under Biden has been adding more than 400,000 jobs per month for 11 straight months.

The glaring disconnect between reality and how the press depicts White House accomplishments means a key question lingers: Why is the press rooting against Biden? Is the press either hoping for a T____ return to the White House, or at least committed to keeping Biden down so the 2024 rematch will be close and ‘entertaining’ for the press to cover? Is that why the Ginni Thomas insurrection story was politely marched off the stage after just a few days of coverage last week by the same news outlets that are now in year three of their dogged Hunter Biden reporting? (“ABC This Week” included 19 references to Hunter Biden yesterday.)

Just look at the relentlessly dour economic coverage. For the press, inflation remains the dominant, bad-news-for-Dems economic story. Even on Friday, the day the stellar jobs report was released, “inflation” was mentioned on cable news nearly as often as “jobs,” according to TVeyes.com.

Axios contorted itself by claiming Biden’s promise to add “millions” of new jobs (which he’s already accomplished), was being threatened because there aren’t enough workers, because so few people are out of work— or something.

The home-run report itself was often depicted as a mixed bag. These were some of the glass-half-empty headlines that appeared in the wake of the latest runaway numbers:

• “America’s Job Market Is On Fire. Here’s Why It Doesn’t Feel Like It” (CNN)

• “Why a Great Jobs Report Can’t Save Joe Biden” (CNN)

Totally normal journalism, right? The president announces another blockbuster jobs report and the press presents it as borderline bad news.

Note that the above headlines about the sour mood prevailing despite the great jobs, and how uncertainty looms, came from the Post, the same outlet that slotted the March jobs report into 87th placed on its website on Friday.

That afternoon readers on the daily’s homepage had to scroll down 87 headlines before they saw the first reference to the great economic news. Among the headlines that ran higher on the Post site that afternoon [was] “What’s The Best Way to Share My Old Home Videos?”

On-air, CNN also downplayed the jobs report, according to Dean Baker, senior economist for Center for Economic and Policy Research. “CNN’s coverage of the report quickly turned to inflation,” he wrote. “In its more general coverage of the economy, the jobs report — which tells us about the employment and earnings situation for more than 160 million people — was barely a blip.”

That’s why, according to a recent poll, 37 percent of Americans think the economy lost jobs over the last year, when it’s gained 7 million. (Just 28 percent of people know jobs were up.)

Virtually all the Beltway coverage today agrees on this central point: When it comes to the economy, Biden’s approval rating is taking a hit because Americans are freaked out by inflation. But maybe it’s taking a hit because Americans are under the false impression that jobs are disappearing. Voters don’t know what they don’t know because the press isn’t interested in telling them about record job success and an economy that’s years ahead of where experts thought it would be coming out of a global pandemic.

Last week, they hit Biden with 14 separate questions at a press briefing over the supposed “gaffe” he made, expressing his moral outrage over the mass killings Russian President Vladimir Putn has unleashed in Ukraine. . . . The press didn’t ask a single question about the state of the Ukraine war.

And remember all winter how the press treated Covid as the most important “crisis” Biden faced and hung the pandemic around his neck? Today, the topic has vanished, the press has given the White House no credit for steering the country back to normalcy, and instead has latched onto gas prices as being a defining issue under Biden. The buried Covid coverage represents a telling example of how an issue that the press itself claimed would define the Biden administration gets translated into no news when it turns towards positive territory.

The Beltway press needs to take its thumb off the Biden scale.

The Labor Department reported today that there were 166,000 new jobless claims last week, the lowest number since November 1968, when the population was much smaller.

The change since Biden took office. They didn’t all start driving for Uber: 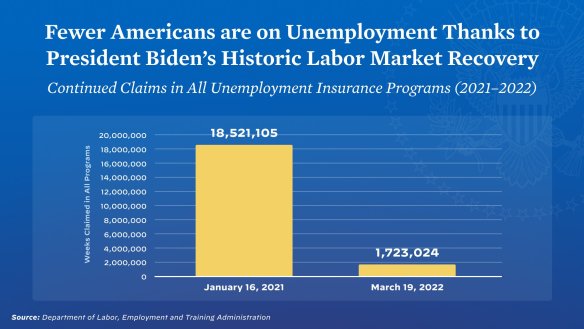 Sadly, the writer quoted above has died in a bicycle accident:

Eric Boehlert, a veteran journalist who was a fierce critic of right-wing misinformation and hypocrisy in the news media, died on Monday in New Jersey. He was 57.