There was a story in the news a little while ago about a Democrat or two fearing that impeaching our criminal president again would cause more division in our beleaguered nation. So I decided to do a small, very unscientific study of a possible difference between Democrats and Republicans. My hypothesis was that Democrats are often said to be afraid of something, while Republicans rarely are. Here are the results (which may be hard to see, so I’ll summarize them below):

To rule out the possibility that Google simply has more results about Democrats, I did another search. I compared “democrats refuse” and “republicans refuse” (simply because Republicans seem to say “no” a lot). 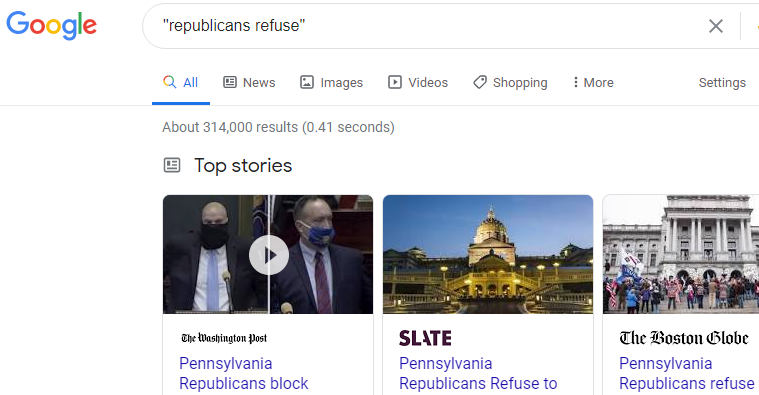 As you may be able to see, there were equally striking results. There were 86,000 results for “democrats refuse” and 314,000 for “republicans refuse”.

What does this tell us about the two parties? I’m not sure. Maybe Democrats are more concerned about consequences than Republicans are. They probably worry more. They are certainly more open to compromise, i.e. less likely to refuse.

This brings me to two relevant articles. The first describes a significant difference between White men and everybody else. It’s called “The Science That Explains Trump’s Grip on White Males”:

Cognitive scientists long ago coined a term for the psychological forces that have given rise to the gendered and racialized political divide that we’re seeing today. That research, and decades of subsequent scholarly work, suggest that if you want to understand the Txxxx phenomenon, you’d do well to first understand the science of risk perception.

[In 1994] a group of researchers . . .  published a study that asked about 1,500 Americans across the country how they perceived different kinds of risks, notably environmental health risks. [They] found that White males differed from White women and non-White men and women in how they perceived risks. For every category of threat, White men saw risk as much smaller and much more acceptable than did other demographic groups. This is what they dubbed “the White male effect”. They also found that White women perceived risks, across the board, to be much higher than White men did, but this was not true of non-White women and men, who perceived risk at pretty much the same levels. . .  Eventually, expansions of this study would include a wide range of risks including handguns, abortion, nuclear threat, and capital punishment.

The second article is “The Democrats’ Stark, Historic Choice”. The author argues that Democrats need to rise above their fears if we’re going to preserve (what remains of) our democracy:

For all the cant we’ll soon be drowned in about the soul of the nation and healing, the Democratic Party and the country now face what is ultimately a problem of public policy. Today, less than half our population controls 82 percent of the Senate’s seats. By 2040, given current demographic trends, the most conservative third of the country alone will control nearly 70 percent of its seats. All of this amounts to a permanent and growing advantage for a party whose leaders greeted the president with applause at its winter meeting after Wednesday’s attack.

The Democrats will soon have the presidency. They will have the House of Representatives. By the skin on the skin of their teeth, they will have the Senate. They will, in sum, be entering into an alignment of power in Washington that we have every reason to believe is becoming exceptionally rare. And every actor within that trifecta will have a choice to make. Should a party that mounted a crusade against a legitimate election and the democratic process—a party whose rhetoric has killed—continue to accrue structural power? Or should the Democratic Party work to curb it?

The author goes on to argue that Democrats need to overcome their fear of institutional change and take aggressive advantage of their fragile Congressional majority. The legislative filibuster should be eliminated in order to pass a full restoration of the Voting Rights Act, expand the franchise, grant statehood to Washington, D.C., and Puerto Rico, and reform the Supreme Court.

As always, the Republicans will refuse to accept small-“d” democratic reforms. The Democrats shouldn’t fear doing whatever they can to achieve them.