Sometimes you (I mean me) finish a book and decide you shouldn’t have bothered. I’m not sure about this one.

It began with an interview. Richard Marshall spoke with philosophy professor Alice Crary as part of his End Times series. This is part of what she said (or wrote, since the conversations are at least partly via email):

“Moral realism” is a label that I deliberately don’t use in describing my image of ethics. Not that . . . the term is obviously ill-suited to capture things I believe. It is, for instance, a conviction of mine that that there are morally salient aspects of the world that . . . lend themselves to empirical discovery. A case could easily be made for speaking of moral realism in this connection. But that would likely generate confusion. When I claim that, say, humans and animals have moral qualities that are as such observable, I work with an understanding of what the world is like, and of what is involved in knowing it, that is foreign to familiar discussions of moral realism. These discussions are often structured by the assumption that objectivity excludes anything [related to] human subjectivity. Moral realism is frequently envisioned as an improbable position on which moral values are objective in this subjectivity-extruding sense while still somehow having a direct bearing on action and choice. . . .

A great deal of my work has been devoted to investigating the grip on the contemporary philosophical imagination of conceptions of objectivity—of the sorts operative in these conversations about moral realism—that take the expulsion of everything subjective as their hallmarks. I have repeatedly argued that restrictions these conceptions impose on what kinds of things count as objective are not justified . . . I have tried to show not only that we should reject the restrictions but also that doing so is urgent because necessary for getting morally and politically salient aspects of our lives into view. . . .

I favor a “wider” conception of objectivity. I mean a conception loose or wide enough to encompass, inter alia, ethical values. . . .

I attack the view—which I describe as narrowly rational—that it is in theory possible to grasp any real connection of thought from an abstract, ethically neutral vantage point. I do so to show that there are ethically decisive considerations that this view leaves us unequipped to recognize, and I take an interest in work in the different humanities, as well as in literature and the other arts, because such work affords resources for uncovering things inaccessible to an abstract gaze. . . .

The upshot is that [for many philosophers, or most] there appears to be no room within ethics for humanistic thinking or artistic expression as such, and this represents a massive and practically catastrophic contraction of ethics. Within my ethical writings, alongside showing that this contraction is philosophically unjustifiable, I bring out how it is morally disastrous—among other things, by identifying harms to human beings and animals that it leaves us incapable of registering.

So I bought and read her book. 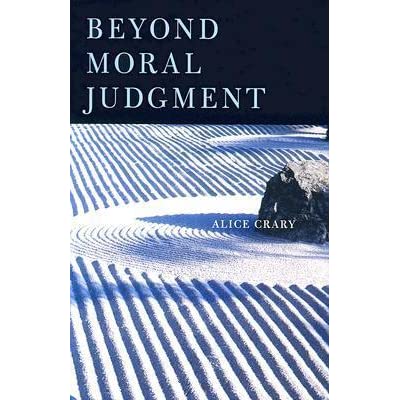 To sum it up, if I can, Prof. Crary says that being ethical and understanding ethics both require us to pay more attention to our feelings or “sensitivity”, what might be called our human reactions to what we experience as we go about our lives, and less attention to strictly ethical propositions, concepts and rules. She discusses cases in which people’s pre-existing ethical views (for example, that ethical people must follow certain rules) make it impossible for them to properly appreciate and evaluate people’s behavior, including their own.

I’m not sure if her views are controversial among philosophers. The idea that feelings underlie ethics has a very long philosophical history, going as far back as ancient Greece (or consider, for instance, the title of Adam Smith’s 1759 book The Theory of Moral Sentiments). That’s one reason I’m not sure I should have read her book.

Another reason is that the book isn’t well-written. It’s repetitious, with lots of descriptions of what she has already argued and what she’s going to argue next. Her sentences also tend to go on and on, requiring frequent backtracking to see how the various clauses relate. I kept reading party because I expected her to show how her approach to ethics yields different ethical views. But the chapters that primarily provide examples amount to saying that various characters in literature deserve more understanding than they get from other characters (works by Jane Austen, Tolstoy and Henry James portray people who are too “moralistic”) and that feminism requires awareness of the social, cultural and economic contexts of women’s lives.

But Prof. Crary may have the (edited) last word (almost):

The idea is that, if the person’s thinking . . . expresses her moral outlook, then, even where it deals with what we are inclined to think of as a “non-moral” topic, it is rightly brought under the heading of moral thinking. . . [Being indifferent] to subject matter . . . allows [moral thought] to range over . . . any topic (e.g. the ways in which humans live and work with animals, the role of luck in human life, the role of . . . games in the cognitive development of children, the manner in which sibling rivalries . . . affect major life choices, etc.) . . . I submit that once we remove ourselves from the artificial atmosphere of academic moral philosophy , where a preoccupation with moral judgments is generally granted the status of a disciplinary requirement, this broad understanding of moral though will strike us as entirely natural . . .

Within contemporary moral philosophy, it is generally assumed that moral differences take the form either of disagreements about whether to apply a moral concept or of disagreements about whether some moral concept . . . is one we ought to operate with in the first place. In contrast, . . . moral differences may exist between people who inherit and develop different ways of thinking and talking about the world even where there is no question of a disagreement of either of these types. . . .

Once we acknowledge the possibility of these additional kinds of moral differences, we are obliged . . . to consider not only individuals’ moral judgments but also mode of thought and speech that do not employ moral concepts, and the sensibilities that inform these additional modes of thought and speech. What becomes apparent is that proper respect for . . . moral conversation involves concern with . . . individuals’ entire personalities, the whole complicated weave of their lives [44-45].