Yesterday, from The Guardian:

The former acting director of the US Immigration and Customs Enforcement agency, which works under the Department of Homeland Security, has condemned the Trump administration’s handling of protests in Portland by deploying federal agents into the city. 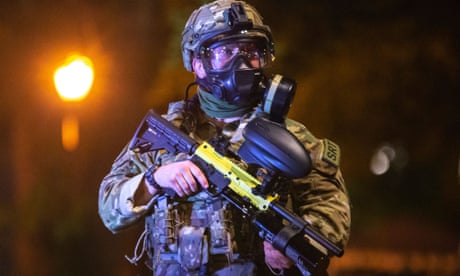 John Sandweg, the former acting director of Ice, who also served as general counsel for the DHS, said Dxxxx Txxxx was using the agency as his own “goon squad”. . . .

America is “staring down the barrel of martial law” as it approaches the presidential election, a US senator from Oregon has warned as Dxxxx Txxxx cracks down on protests in Portland, the state’s biggest city.

In interviews with The Guardian, Democrat Ron Wyden said the federal government’s authoritarian tactics in Portland and other cities posed an “enormous” threat to democracy, while his fellow senator Jeff Merkley described it as “an all-out assault in military-style fashion”.

In the early hours of Saturday, thousands of protesters gathered again outside the federal courthouse in the city, shooting fireworks at the building as teargas, dispensed by US agents, lingered above. . . . At around 2.30 am, agents marched down the street, clearing protesters with gas at close range. They also extinguished a fire outside the courthouse.

The independent watchdogs for the US justice and homeland security departments said on Thursday they were launching investigations into the use of force by federal agents, including instances of unidentified officers in camouflage gear snatching demonstrators off the streets and spiriting them away in unmarked vehicles.

But Txxxx this week announced a “surge” of federal law enforcement to Chicago and Albuquerque, in addition to a contingent already in Kansas City. The move fueled critics’ suspicions that the president was stressing a “law and order” campaign theme at the expense of civil liberties.

Wyden said in a statement: “The violent tactics deployed by Dxxxx Txxxx and his paramilitary forces against peaceful protesters are those of a fascist regime, not a democratic nation.”

Speaking by phone, he said: “Unless America draws a line in the sand right now, I think we could be staring down the barrel of martial law in the middle of a presidential election.”

Military control of government was last imposed in the US in 1941, after the attack on Pearl Harbor. In current circumstances it would entail “trashing the constitution and trashing people’s individual rights”, Wyden warned.

The senator recalled a conversation with a legal adviser for the head of national intelligence.

“I asked him again and again what was the constitutional justification for what the Txxxx administration is doing in my home town and he completely ducked the questions and several times said, ‘Well, I just want to extend my best wishes to your constituents.’
“After I heard him say it several times, I said my constituents don’t want your best wishes. They want to know when you’re going to stop trashing their constitutional rights.”

Txxxx has falsely accused his election rival, Joe Biden, of pledging to “defund the police” so violent crime will flourish. Democrats condemn Txxxx for a made-for-TV attempt to distract both from Black Lives Matter protests and his mishandling of the coronavirus pandemic, now killing more than 1,000 Americans a day.

“I wish the president would fight the coronavirus half as hard as he attacks my home town,” Wyden said. “I think he’s setting up an us-against-them kind of strategy. He’s trying to create his narrative that my constituents, who are peaceful protesters, are basically anarchists, sympathisers of anarchists and, as he does so often, just fabricate it.
“Txxxx knows that his [coronavirus] strategy has been an unmitigated disaster. The coronavirus is spiking in various places and he’s trying to play to right wing media and play to his base and see if he can kind of create a narrative that gives him some traction.”

The Portland deployment, Operation Diligent Valor, involves 114 officers from homeland security and the US Marshals Service, according to court documents. Local officials say their heavy-handed approach, including teargas and flash grenades, has merely enflamed demonstrations against police brutality and racial injustice. The justice department-led Operation Legend involves more than 200 agents each in Kansas City and Chicago as well as 35 in Albuquerque. [Its stated purpose is to target] violent crime.

Lori Lightfoot, the mayor of Chicago, has vowed to resist the federal intervention.
“We’re not going to allow the unconstitutional, state-sanctioned lawlessness we saw brought to Portland here in Chicago,” she said on Thursday.

“I would say that you probably don’t believe that these federal forces will attack protesters if the protesters are peaceful and you will be wrong because that’s exactly what they’re doing in Portland,” he told The Guardian.

“This is an all-out assault in military-style fashion on a peaceful-style protest. The way to handle graffiti is put up a fence or come out and ask people to stop doing it, not to attack a peaceful protest but that’s exactly what happened. It’s very clear what the president is trying to do is incite violence and then display that violence in campaign ads. And I say this because that’s exactly what he’s doing right now. This is not some theory.”