I wish every voter in the country would read this article. Okay, relatively few will, but I’m convinced she’ll be our next president anyway. From “The Education of Elizabeth Warren” in the New York Times, here’s a much shorter version:

By 1981, Ms. Warren and her husband had secured temporary teaching posts at the University of Texas, where she agreed to teach bankruptcy law. She quickly earned a reputation for lively lectures, putting students on the spot and peppering them with questions and follow-up questions…

Even visitors to her class got the treatment. One of them was Stefan A. Riesenfeld, a renowned bankruptcy professor who had come to lecture on the Bankruptcy Reform Act of 1978. The law, which had expanded bankruptcy protection for consumers, was already under attack by the credit industry, which argued that it made personal bankruptcy too attractive.

Even so, Mr. Riesenfeld explained to Ms. Warren’s class, those who filed personal bankruptcy were “mostly day laborers and housemaids who had lived at the economic margins and always would,” she wrote in her 2014 memoir.

“I asked the obvious follow-up question: ‘How did he know?’” Ms. Warren wrote. After more questioning, it became clear that not only did Mr. Riesenfeld have no real answer, he was irritated by Ms. Warren’s probing.

The subject struck close to home. When she was growing up in Oklahoma, her father’s heart attack had thrown their household into precarious financial territory, forcing her mother to take a minimum-wage job answering telephones at Sears.

She remembers being fearful as she lay in bed at night listening to her mother cry. “She thought I had gone to sleep. I didn’t know for sure the details of why she was crying, but I knew it was bad and that we could lose everything,” Ms. Warren said.

(Later, the oil glut of the 1980s would destroy her brother David’s once-thriving business delivering supplies to oil rigs. Her brother John, a construction worker, would also struggle after the oil market collapsed….)

She wanted answers, more than Professor Riesenfeld could provide….

Dozens of people would eventually be involved in the … analysis of a quarter million pieces of data gathered from bankruptcy cases filed from 1981 through 1985.

Among the researchers was Kimberly S. Winick, then a University of Texas law student … While Ms. Warren didn’t talk a lot about her views, Ms. Winick said she believed that the project’s initial theory was that, “If you filed bankruptcy, you must be cheating.”

“Liz was from a more conservative place,” Ms. Winick said. “And she was somebody who had worked very, very, very hard all her life. And she had never walked away from a debt. And I think she kind of started with the view — let’s see what people are doing and how they’re cadging on their debts and screwing their creditors.”

That was the conventional thinking of the day….

While the [bankruptcy files] did not tell the whole story, they provided enough evidence for Mr. Warren and her co-authors to write, “Repeatedly, we have been surprised by the data and forced to rethink our own understanding of bankruptcy”.

… Over the years, the research elevated Ms. Warren’s status, from little-known Texas professor to sought-after lecturer, writer and consultant in bankruptcy law. It also set the stage for her career in politics.

In 1995, Mike Synar, a former Democratic congressman from her home state, asked Ms. Warren, by then a Harvard professor, to advise a special commission reviewing the bankruptcy system….

It was during that period, in 1996, that she switched her party affiliation from Republican to Democrat, though she insists that her essential conversion was from “not political” to “political”.

“I didn’t come from a political family,” she said. “I hadn’t been political as an adult. I was raising a family, teaching school and doing my research,” she said.

Then she went to Capitol Hill.

“I quickly discovered that every single Republican was on the side of the banks and half the Democrats were,” she said. “But whenever there was someone who would stand up for working families, it was a Democrat.” 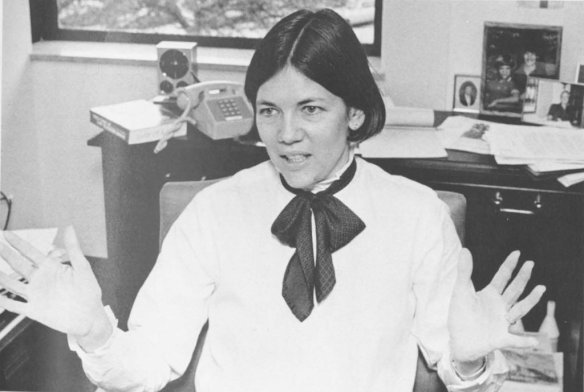