This has been New Zealand’s flag since 1902. It’s got the Union Jack in the upper left corner and the Southern Cross constellation to the right. It’s almost the same as Australia’s flag (Australia’s has six white stars instead of four red ones). 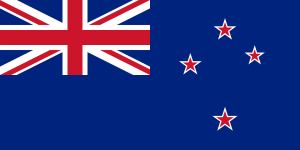 Although most Kiwis (their national bird is the kiwi) think their flag is fine as it is, there’s been talk about changing it for years. Some would prefer that it not look so much like Australia’s. Some object to the Union Jack, arguing that it’s an anachronistic symbol of New Zealand’s colonial past.

Among the Kiwis who want to change the flag is John Key, the Prime Minister. In addition to getting rid of the Union Jack, he wants the new flag to include New Zealand’s quasi-official national symbol, a silver (or white) fern.

So, after two long years of discussion and analysis, including the creation of a flag replacement commission, the country is now holding the second stage of a national referendum on whether to replace the flag. The choice is between the old flag above and one with a big white fern and some black in the upper left corner (black being one of New Zealand’s national colors):

Opinion polls suggest that the old flag is going to easily win the referendum. That makes sense, since its proposed replacement has been compared to a beach towel.

Whichever flag wins, of course, a significant number of Kiwis are going to be unhappy. The majority will celebrate and the minority will lick their wounds. That’s where my modest proposal comes in.

When changing something that lots of people care about, it’s always a good idea to consider a relatively small change first. Maybe a small change will address whatever problem exists without upsetting the people who prefer the status quo. Thus, if the people where you work think the communal coffee is too bitter, you try to find coffee that’s less bitter. You don’t immediately replace the coffee with cranberry juice.

Now, since the principal objections to the current flag are that it looks too much like Australia’s, it includes a Union Jack and it doesn’t have a fern, why not simply replace the Union Jack with a similarly-colored fern? To wit:

This flag is clearly different from Australia’s, it replaces the Union Jack with a fern (but not an overwhelmingly large one) and it doesn’t mess with the existing colors. As William Mulholland famously said about the water he’d successfully delivered to Los Angeles, making a desert of the Owens Valley:

There it is. Take it!

Americans might not be able to compromise on anything, but there’s still hope for the Kiwis.

(Note: The compromise flag presented above was created in our WOCS Design Lab. Anyone who wants to use it for any purpose is completely free to do so, especially in New Zealand.)