A recent paper by three political scientists argues that American voters don’t nicely divide between liberals and conservatives. There are also populists and libertarians. In order to understand the American electorate, therefore, we need two dimensions, not one. This observation isn’t new, but it’s worth keeping in mind when thinking about our dysfunctional political system.

Instead of the standard left/right dimension, we need a left/right social dimension and a left/right economic dimension. Polling data indicates that the electorate is rather evenly distributed between four ideological tendencies: 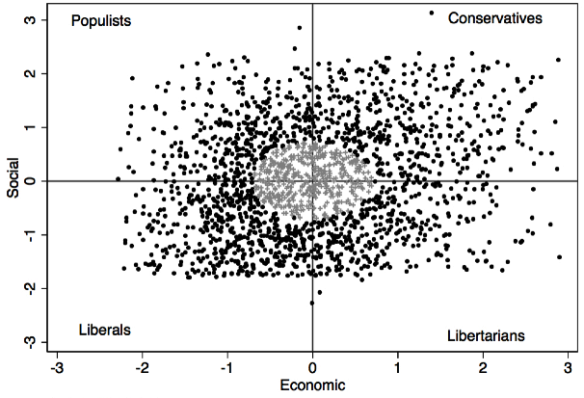 On a social issue like gay marriage, for example, liberals and libertarians tend to be in favor of it. I mean, who cares if gay people get married? Well, populists (say, a truck driver who belongs to the Teamsters) and the conservatives at the Republican National Committee aren’t happy about it.

On an economic issue like the minimum wage, however, liberals and populists like the idea that people with jobs should have a relatively decent standard of living. Conservatives and libertarians, on the other hand, think it’s wrong to force business owners to pay their employees an artificially high wage.

The authors of the article identify a fifth group, the moderates in the middle, whose ideology isn’t especially liberal or conservative. They represent some of the infamous “swing” voters who don’t know who to vote for (Obama, Romney, who can decide?).

What the diagram shows, however, is that the populists and libertarians will also tend to swing between the two major parties, since their views don’t match up nicely with either the liberal/liberal Democratic candidates or the conservative/conservative Republican ones.

It may also be the case that the moderates, populists and libertarians will tend to avoid voting altogether, since the major candidates don’t fully represent their views.

Would it be better if there were four major parties instead of two? That might result in more people voting, which is supposedly a good thing in a democracy. But that would seem to require making our political system more representative, for example, by moving away from winner-take-all and allowing minority parties to gain more power. The authors of the paper don’t expect much to change any time soon:

There is no great mystery as to why American political parties can’t get beyond the left-right divide. Parties are by nature risk-adverse organizations … tightly moored to the status quo. Only under the most extreme circumstances—for parties, that means repeated losses at the polls—do they adopt changes in their electoral strategy. Thus, as long as both parties can plausibly convince themselves that their ideological appeals are not responsible for their electoral defeats, they will avoid making any fundamental changes in their basic strategies.

At the same time, … neither Republicans nor Democrats will be able cultivate a majority by only focusing on their core ideological supporters. There are simply not enough additional conservative and liberal votes to be harvested to produce an electoral majority. So, for the time being, both parties are caught in fundamental dilemma—they lack the incentive to move beyond their ideological anchors and yet they cannot become a majority party by becoming more closely tied to these anchors. They are thus set adrift in a sea of future uncertainty.