Katha Pollitt’s 2016 review of “Evicted”, by Matthew Desmond, in The Guardian:

What if the dominant discourse on poverty is just wrong? What if the problem isn’t that poor people have bad morals – that they’re lazy and impulsive and irresponsible and have no family values – or that they lack the skills and smarts to fit in with our shiny 21st-century economy? What if the problem is that poverty is profitable? These are the questions at the heart of Evicted, Matthew Desmond’s extraordinary ethnographic study of tenants in low-income housing in the deindustrialised middle-sized city of Milwaukee, Wisconsin.

You might not think that there is a lot of money to be extracted from a dilapidated trailer park or a black neighbourhood of “sagging duplexes, fading murals, 24-hour daycares”. But you would be wrong. Tobin Charney makes $400,000 a year out of his 131 trailers, some of which are little better than hovels. Sherrena Tarver, a former schoolteacher who is one of the only black female landlords in the city, makes enough in rents on her numerous properties – some presentable, others squalid – to holiday in Jamaica and attend conferences on real estate.

Desmond follows the intertwined fortunes of eight families and a host of minor characters. Arleen Belle and Doreen Hinkston are black mothers clinging to the edge of low-wage employment; Crystal and Trisha are fragile young black women whose upbringing was violent and chaotic; Lamar is a genial black father of two who lost both his legs to frostbite when he passed out on crack in an abandoned house; Scott is a white male nurse who lost his licence when he stole opioids from his patients; Larraine, also white, is a slightly brain-damaged sweet soul. It is sometimes a little hard to keep up with the storylines as they weave in and out of the text, but no matter. What is important is that Desmond takes people who are usually seen as worthless – there is even a trailer-dweller nicknamed Heroin Susie – and shows us their full humanity, how hard they struggle to retain their dignity, humour and kindness in conditions that continually drag them down.

The main condition holding them back, Desmond argues, is rent. The standard measure is that your rent should be no more than 30% of your income, but for poor people it can be 70% or more. After he paid Sherrena his $550 rent out of his welfare cheque, Lamar had only $2.19 a day for the month. When he is forced to repay a welfare cheque he has been sent in error and falls behind on rent, he sells his food stamps for half their face value and volunteers to paint an upstairs apartment, but it is not enough. People such as Lamar live in chronic debt to their landlord, who can therefore oust them easily whenever it is convenient – if they demand repairs, for example, like Doreen, or if a better tenant comes along. Sherrena liked renting to the clients of a for-profit agency that handles – for a fee – the finances of people on disability payments who can’t manage on their own. Money from government programmes intended to help the poor – welfare, disability benefits, the earned-income tax credit – go straight into the landlord’s pocket and, ironically, fuel rising housing costs. Public housing and housing vouchers are scarce. Three in four who qualify for housing assistance get nothing. 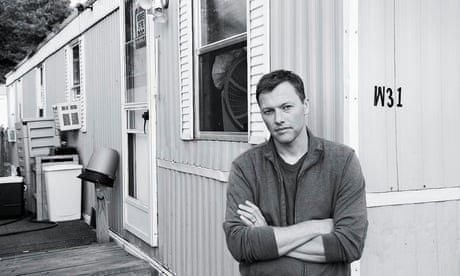 Matthew Desmond: ‘I want my work to bear witness to this problem that’s raging in our cities’

Even in the Great Depression, evictions used to be rare. Now, each year, hundreds of thousands, perhaps millions, of renters are put out on the street. Even a paid-up tenant can be easily evicted. Arleen loses one apartment when her son Jori throws a snowball at a passing car and the enraged driver kicks in the front door, and another when the police come after Jori when he kicks a teacher and runs home. Any kind of trouble that brings the police can lead to eviction, which means women can lose their homes if they call 911 when their man beats them up. Think about that the next time someone asks why women don’t call the cops on violent partners.

As Desmond shows, the main victims of eviction are women. Why? They are paid less than men for doing the same job. They are less able to make deals with their landlord, who is almost always a man, to work off part of their rent with manual labour. The main reason, though, is that women are raising children as single mothers. They not only have all the costs and burdens of childrearing, they need bigger apartments – which, since landlords dislike renting to families with young children, are harder to find and a lot harder to keep. Other sociologists – Kathryn Edin, for example – have found that single mothers often get help under the table from their children’s fathers, but Arleen, Doreen and Doreen’s adult daughter Patrice get mostly trouble from men, who are variously abusive, addicted, vanished or in prison. In one of the book’s many small sad moments, Arleen claims she receives child support in order to seem more stable and respectable to a prospective landlord. In fact, she gets nothing.

Desmond lays out the crucial role housing plays in creating and reinforcing white privilege. In Milwaukee, one of the most segregated cities in the US, all black people suffer from housing discrimination and all white people benefit at least a little from the racial dividend – a landlord who will rent to them but not to black people, for instance, or offer them a nicer apartment. Black people have the worst housing in the worst neighbourhoods – the great fear of the trailer-park people, who are all white, is that they will end up on the black side of town. Eviction hits black women hardest of all, and the bleak benches of housing courts, which deal with disputes between landlords and tenants, are full of black women and their children: “If incarceration had come to define the lives of men from impoverished black neighbourhoods, eviction was shaping the lives of women. Poor black men were locked up. Poor black women were locked out.”

What are the social costs of eviction? It puts incredible stress on families. It prevents people from saving the comparatively small sums that would let them stabilise their situation. They are always starting over from scratch, losing their possessions in the chaos of removal, or putting them in storage and losing them when they can’t pay the fees. An eviction on your record makes the next apartment harder to get. Eviction damages children, who are always changing schools, giving up friends and toys and pets – and living with the exhaustion and depression of their parents. We watch Jori go from a sweet, protective older brother to an angry, sullen boy subject to violent outbursts who is falling way behind in school.

Eviction makes it hard to keep up with the many appointments required by the courts and the byzantine welfare system: several characters have their benefits cut because notices are sent to the wrong address. Eviction destroys communities: when people move frequently, they don’t form the social bonds and pride in place that encourage them to care for their block and look out for their neighbours. “With Doreen’s eviction, Thirty-Second Street lost a steadying presence – someone who loved and invested in the neighbourhood, who contributed to making the block safer – but Wright Street didn’t gain one.”

“There is an enormous amount of pain and poverty in this rich land,” Desmond writes in his conclusion. That is easy to say, and many books by journalists and academics have done so. By examining one city through the microscopic lens of housing, however, he shows us how the system that produces that pain and poverty was created and is maintained. I can’t remember when an ethnographic study so deepened my understanding of American life.to all and safeguarding our independence.